As part of the school there is a Nursery provision for children aged 2-4. The Nursery room is filled with exciting and fun learning opportunities and has a large outdoor area in which the children can explore nature and experience their learning in an outdoor setting. The staff are fully qualified and experienced Nursery practitioners and are committed to providing our Nursery children with the best care and learning opportunities they can.

Learning takes place through child-initiated play with a huge variety of resources and equipment to help them to develop their skills and knowledge of the world, through the framework of the Early Years curriculum.

We offer provision of up to 30 hours per week, term time only, sessions will run from 8.45am to 3.15pm in half-day blocks. Places are offered on the basis that children will attend for a minimum of 15 hours per week. The school admits children three times during the year (for as long as places are available). Funding and entitlement are based on a three-term year, with children starting in September, January and April.

Parents need to check whether they are eligible and how many hours they are entitled to via the online Eligibility Checker at www.childcarechoices.gov.uk. If eligible an 11-digit code/ reference number will be generated and should be given to the school in the half term before the child starts. Alternatively, parents are able to purchase additional hours.

If parents/ carers require hours outside of the school day, they can access our breakfast club and after school club sessions.  Sessions can be purchased in a pattern to suit parents’/carers’ needs, subject to availability. 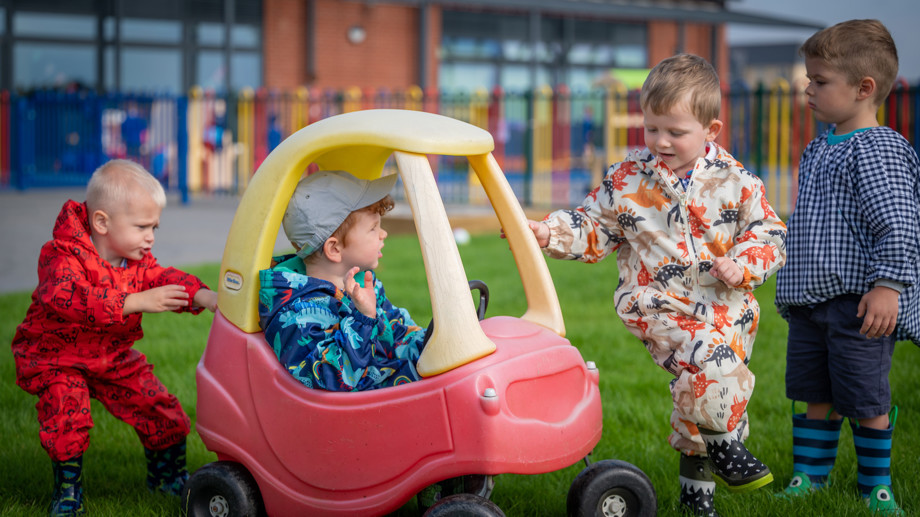 Applications for Windrush Church of England Primary School should be made through our Nursery application form. Places are subject to availability. In line with when children become eligible for their 15 hours of free early education, there are three admission points throughout the year, each with their own closing date as follows:

The school (and nursery) has a designated catchment area bounded by the A40 to the south, then along the centre of the A4095 Curbridge Road and the centre of Deer Park Road to the east, the B4047 to the north, and the western boundary of Witney Lakes Resort and Windrush Industrial Park (see the map at the end of the document).

When the nursery is oversubscribed, after the admission of pupils with an Education, Health and Care plan naming the school, priority for admission will be given to those children who meet the criteria set out below, in priority order:

1a. Looked after children and children who were previously looked after but immediately after being looked after became subject to adoption, a child arrangements order, or special guardianship order.

1b. Children who were previously in state care outside England but have been adopted and are no longer in state care.

3. Children who live within the catchment area of the school who have a sibling who is currently on roll and will still be attending Windrush Church of England Primary School at the time of entry.

4. Other children who live within the catchment area of the school.

5. Children living outside the catchment area who have siblings who already attend Windrush Church of England Primary School.

6. Other children who live outside the catchment area.

If there are more applicants than places, applications will be prioritised according to the above criteria, and within priority 2-6, by children who live closest to the school by a straight line distance.

If in categories 2-6 above the distance of two applicants is equidistance and a tie-break is necessary to determine which child is admitted, random allocation will be undertaken by the admissions authority.

Places will be offered  15 hours minimum (the universal free entitlement). Parents/ carers requesting additional entitlement, above 15 hours but no more than 30 hours, will need to indicate whether they will purchase this additional provision or whether they have an eligibility code from the government, which must be submitted to the school in the half term prior to starting (i.e by 31 December, 31 March or 31 August).

The school will operate a Continuing Interest List (Waiting List). Where the school receives more applications for places than there are places available, a continuing interest list will operate until the end of the academic year. This will be maintained by the school and it will be open to any parent /carer to ask for his or her child’s name to be placed on the waiting list, following an unsuccessful application.

If an eligible child applies after the start of the term, for example if they have just moved into the area, the child will be admitted or placed on the continuing interest list.

There is no statutory right of appeal. Any complaint about the operation of this admissions policy should be made in line with the school’s complaints policy.

A place at the Nursery does not also mean a place at the school in the Reception Class. A separate application should be made for that at the appropriate time. Once a child is admitted to the Nursery, the child is entitled to remain in a universal part time place until the term after he/she becomes five* However this may not be the most appropriate place for the child if all his/her peers have taken up their Reception place in a separate class within the school or another primary school.

*N.B. In the case of a summer born child, parents / carers must either take up the school Reception place by the April before the child’s fifth birthday; or else need to re-apply through the next admission round for a place to start in the September, usually as a Year 1 child. See the Primary School Admissions Policy for more detail on deferring entry.

A child in the care of a local authority or being provided with accommodation by a local authority in the exercise of its social services function. An adoption order is one made under the Adoption Act 1976 (Section 12) or the Adoption and Children Act 2002 (Section 46). A ‘child arrangements order is one settling the arrangements to be made as to the person with whom the child is to live (Children Act 1989, Section 8, as amended by the Children and Families Act 2014, Section 14). A ‘special guardianship order’ is one appointing one or more individuals to be a child’s special guardian/s (Children Act 1989, Section 14A).

Criterion 1b includes children who were previously in state care outside England but have been adopted and are no longer in state care, as per the ministerial request made in December 2017. Evidence of the previously looked after status and/or the adoption will be requested. Where such evidence is not available, The Trust and Oxfordshire County Council will make a pragmatic decision based on the information available so that there is a local consistent approach.

Applications under criterion 1 (a or b) must be accompanied by evidence to show that the child is looked after or was previously looked after. Parents / carers will need to provide the following evidence:

When applying under criterion 2 (exceptional medical or social needs), you must include supporting evidence from an independent professional person who is aware of the situation and supports your reasons for preferring Windrush Church of England Primary School. This supporting evidence must clearly demonstrate why the school is the most suitable and must illustrate the difficulties that would be caused if your child had to attend another school. The person supplying the evidence should be a doctor, heath visitor, social worker, etc. who is aware of the child’s or the parents’/ carers’ case. The school reserves the right to ask for further evidence or clarification where necessary and may seek the advice of appropriate educational professionals where necessary. ‘Social need’ does not include a parent’s / carer’s wish that a child attends the school because of a child’s aptitude or ability or because their friends attend the school. ‘Medical need’ does not include mild medical conditions.

Changes of address occurring shortly after application can normally be taken into account if notified in writing and confirmed in the form of documentary evidence to the Schools Admissions. Places cannot be allocated on the basis of intended future changes of address

For admissions purposes, the following definitions of a sibling are used: • A brother or sister (both parents the same) living at the same home address; or

The straight-line distance used to determine proximity of the home to the school will be measured by Oxfordshire County Council’s Geographical Information System.

The start point of the measurement is the “seed point” of the home address. The “seed point” is provided by Ordnance Survey from information compiled from Royal Mail and Councils via Local Land and Property Gazetteer (LLPG). The seed point normally falls within the bounds of a property. The accuracy of seed points is to the nearest ten centimetres and uses the British Coordinate System (Easting/Northing). It is possible to move the location of an individual seed point, but this is not necessary for most addresses. It is not possible to verify the individual location of every seed point prior to measuring due to the number of addresses in Oxfordshire and surrounding areas.

The end point of the straight-line distance will be the front door of the school.

Year – refers to the academic year (September to August)

Published Admission Number – The number of places, in part time equivalents (15hrs) agreed each year with the County Council, and published in the Council’s Pupil Place Plan.

Universal Entitlement – 15 hours per week, term time only or 570 hours a year, to which every child is entitled from the term after their 3rd birthday 3

Grace period – when a child’s eligibility for the extended entitlement ceases, the government allows the funded place to continue for a specified time period.

Early Education for eligible children aged 2 - A targeted offer of 570 hours per year for the most vulnerable 2 year old children, from the term after their 2nd birthday, with the aim of reducing the pre-school educational gap that can start to occur from this age. Once a funded 2 year old child starts a funded place eligibility continues even if the families circumstances change.

Your browser is out-of-date!

Update your browser to view this website correctly. Update my browser now